Advocating on behalf of homeless, marginalized and socially isolated women is in our DNA. The women we serve direct our efforts, and we focus on initiatives they identify as critical: poverty reduction and an increase in safe, affordable, low barrier housing.

This active group, directed by participants, meets once a month. They support and attend rallies, host guest speakers on activist issues and explore activism and advocacy skills-building topics.

Five years ago, participants and community members identified the rising cost of transit as a critical issue, and as a result Sistering was instrumental in forming the Fair Fare Coalition, advocating for economically accessible TTC. We still play an active role in supporting FFC and several participants are part of the coalition. 
In 2015, we launched our research report, asking for free transit for those on Ontario Disability Support Program (ODSP) and Ontario Works (OW), a $50 Metropass and $1 tokens for low-income wage earners, a discount to agencies like Sistering who buy tokens in bulk, and free transit on heat alert, cold alert and smog alert days. We succeeded in getting a commitment to a low-income Metropass, $112 compared to $145, to be phased in over five years, beginning with OW and ODSP recipients and working up to low-income wage earners.

We currently sit on the City of Toronto Advisory Committee for Transit Fare Equity. In partnership with TTC Riders and many other community groups, we organized a rally at City Hall in support of our “asks”.

We are active with Commitment 2 Community (C2C) and the Alliance for a Poverty Free Toronto (APT) that organizes around the Poverty Reduction Strategy.

We participated in Up for Debate, which worked to put women’s issues on the federal election platform, including a campaign that centred on an interactive art display for Up for Debate.

We are active with the Toronto Drop In Network (TDIN) Advocacy Committee, that coordinates advocacy and advocacy tools for Toronto’s drop ins.

Sistering participants and staff were key in mobilizing the City to establish two 24/7 drop ins for women in Toronto. We identified an immediate need for evening and overnight low barrier services for low-income women not accessing shelters, particularly sex workers, substance users and consumer/survivors. Our Peer Harm Reduction team acted as tireless advocates on the streets  and inside the system. Sistering’s Drop In opened 24/7 on November 1, 2015. Harm Reduction Peers and staff are sitting on an advisory committee for the 24/7 drop ins.

Sistering was involved in the Advocacy Centre for Tenants Ontario (ACTO) Housing Now Community Forum and March, and the campaign for a federal housing strategy.

Sistering helped form the Allies Group calling for low barrier, harm reduction shelters in the City. We signed a Joint Statement and participated in a press conference with many other agencies and groups, asking the City to take action to provide low barrier shelters. We continue to actively advocate around the need for harm reduction focused, low barrier, emergency shelter.

Participants regularly take part in rallies and marches including Reclaim the Streets ad Take Back the Night. We took part in the International Day to Eliminate Violence Against Sex Workers, International Sex Workers Day, and a fundraiser for safe sex work. We participated in the Strawberry Ceremony for Missing and Murdered Aboriginal Women.

We are on the committee for safe injection sites. We had activities and outreach for Overdose Awareness Day and World Hep C Day.

We participate in the Bad Date Coalition. 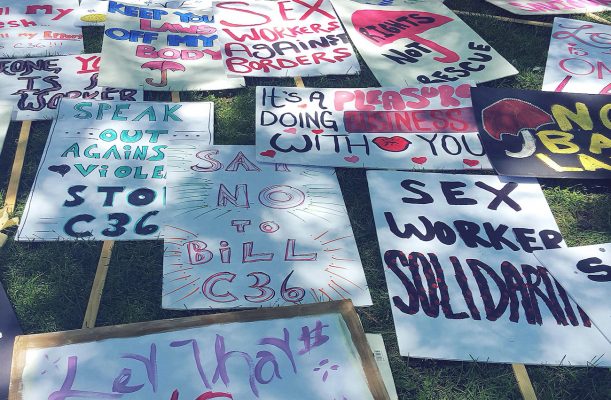 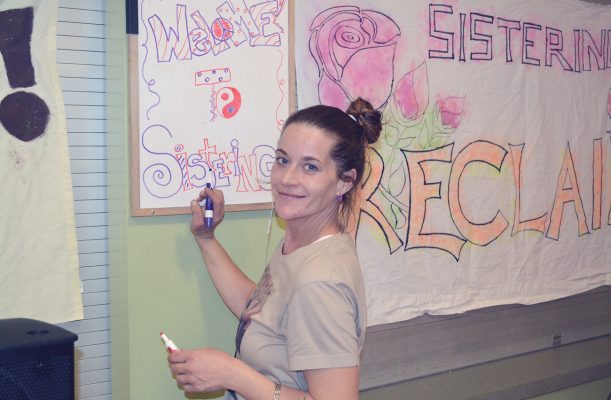 Person Writing on Board 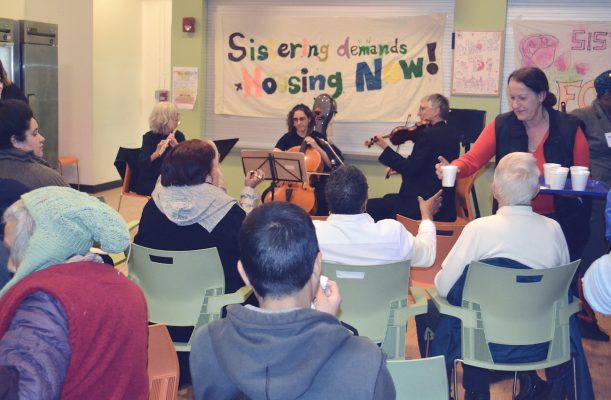 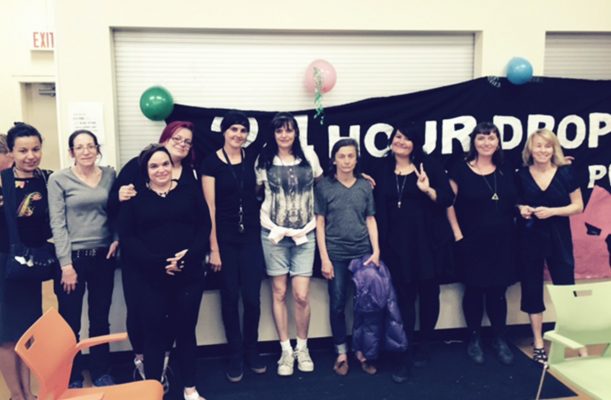 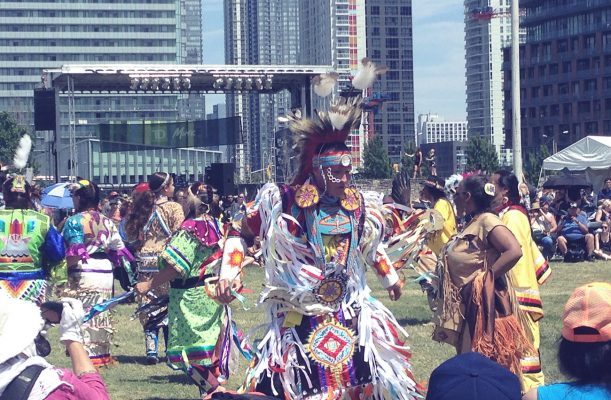 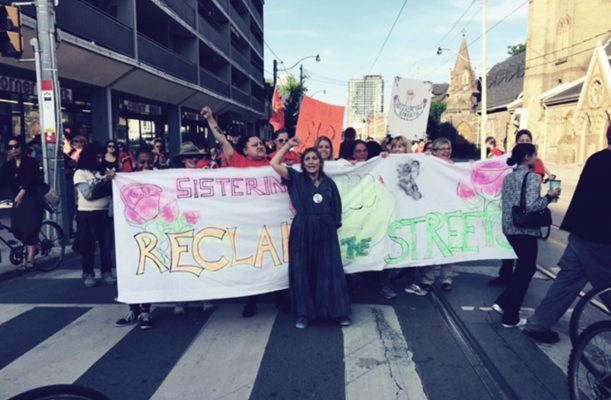